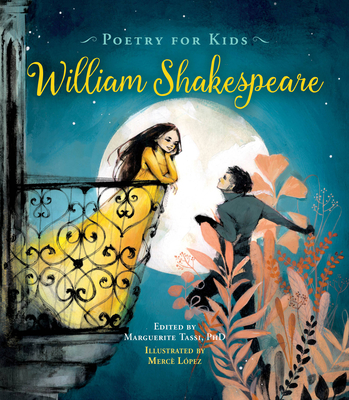 Love! Betrayal! Ambition! Tragedy! Jealousy! William Shakespeare's universal themes continue to resonate with readers of all ages more than 400 years after his death.

This wonderful, fully illustrated book introduces children to the Bard and more than thirty of his most famous and accessible verses, sonnets, and speeches. From “Shall I compare thee to a summer’s day?” to “O, she doth teach the torches to burn bright!” and “All the world’s a stage,” the words and poetry of the greatest playwright and poet spring to life on the page.

The next generation of readers, poets, and actors will be entranced by these works of Shakespeare. Each poem is illustrated and includes an explanation by an expert and definitions of important words to give kids and parents the fullest explanation of their content and impact.

"An enticing entree to the glories of Shakespeare's verse." —Kirkus Reviews

"A richly illustrated selection of 31 poems and excerpts from Shakespeare's most popular works. The selected writings provide a fantastic scope of Shakespeare's oeuvre. ... López's illustrations are intricate, dramatic, and moody; they help bring life and meaning to the words." —School Library Journal

William Shakespeare was an English poet and playwright, widely regarded as the greatest writer in the English language and the world's pre-eminent dramatist.  He is often called England's national poet and the "Bard of Avon". His extant works include some collaboration, consisting of about 38 plays, 154 sonnets, two long narrative poems, and a few other verses, the authorship of some of which is uncertain. His plays have been translated into every major living language and are performed more often than those of any other playwright.